One should use the word ’’intelligence’’ wisely, because it could easily imply that other approaches are foolish or downright stupid. But given that prime minister Rutte framed the first lockdown as ‘’intelligent’’ why not ask the obvious: Is this lockdown less intelligent than the first lockdown? In October, Prime Minister Rutte preferred to talk about people taking personal responsiblity over addressing the need for serious measures. One might have wondered whether he wanted to be re-elected, because around 70% of the people were in favor of stronger measures. Rutte’s mere emphasis on personal responsibility was anything but intelligent.

After a long debate Rutte and De Jonge eventually did start a lockdown in the late fall. Scientific research uncovered that this style of leadership is typical of so-called “loose” cultures, characteristic of the Netherlands, Brazil, or Spain. In ‘’tight” cultures, characteristic of Japan, Singapore, or closer to home, Germany, governments respond faster and more effectively to an emerging crisis. Indeed, in the fall, countries with loose cultures had many more infections and deaths than countries with tighter cultures.

Tightness versus looseness is also reflected in how strongly “ordinary” people correct one another’s norm violations. In tight cultures people know that one cannot get away with ignoring signs saying “do not walk on the grass”, but in loose cultures they know they can. The Dutch song “15 million Dutchmen” embraced by any Dutch person serves as a strong case in point. If there was a lawn in front of the Royal Palace at Dam square, the Dutch would no doubt start a game of soccer there.

Over time most of us did wear face masks in grocery stores, and complied with norms and rules as well. While compliance was also high in the first lockdown, when the streets were empty and many elderly people were too afraid to go outside. Also, all sports activities were prohibited, including the professional soccer in the primary league. We could not even see Ajax winning or Heracles rising to the occasion. I grew up in a village close to Almelo, and warm feelings for the first love will always remain warm – I love both Greek Gods.

Interestingly, during the second lockdown no questions were raised about prohibiting professional football. Around 4 million people in the Netherlands actively follow professional football. Scientific research has shown that people who watch football show hormonal response such as increases in testosterone and cortisol, as if they were playing the game themselves. People also connect through football: with a smile, with a tease, with a virtual hug. It speaks to our need for being part of a collective. The lockdown we find ourselves in now is the result of a government that followed the wisdom of the crowd, four million people who are excited to see their favorite soccer club play and win. That we can now enjoy professional soccer is easily taken for granted. Yet for millions it makes this lockdown much more bearable, and therefore more intelligent, than the first lockdown. 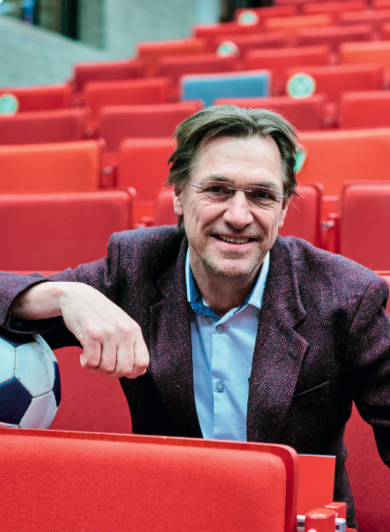 Paul van Lange (1961) is Professor and Chair of Social Psychology at the Vrije Universiteit Amsterdam and Distinguished Research Fellow at the University of Oxford. His research focuses on the psychology and evolution of human cooperation as well as the psychology of climate change, trust, and norm-violation in society. After serving as coach of male and female teams at AFC and SC Buitenveldert, he also publishes on the psychology of football. www.paulvanlange.com